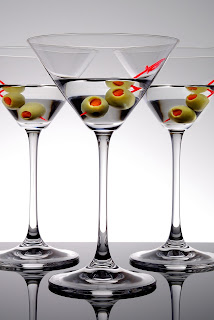 In 1862, "Professor" Jerry Thomas, bartender at San Francisco's Occidental Hotel crafted a drink consisting of four parts sweet red vermouth to one part gin. He made that drink for a gold miner on his way to the town of Martinez. The drink stuck as a favorite at the hotel bar, enjoyed mainly by travelers awaiting the ferry to Martinez. 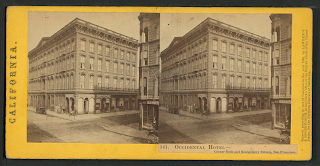 The recipe for The Martinez was listed in The Thomas Bartender's Guide of 1887 as a mix of Old Tom Gin, sweet vermouth, a dash of maraschino and a dash of bitters. Garnish with a slice of lemon and two dashes of gum syrup.

Believe that, if you will as the origin of The Martini or you can choose to believe the claim that it came from across the pond and was named after the Martini-Henry Rifle, used by the British army in the late 1800s. Both the rifle and the cocktail were know for their strong kick. 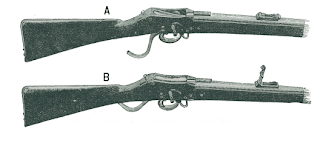 There is even the theory that the drink was created by a tender named Martini at New York's Knickerbocker Hotel in 1911 - this is the least accepted theory. 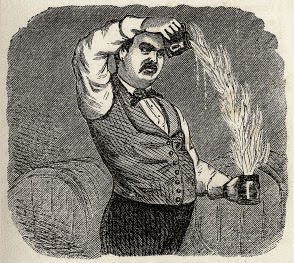 Regardless the drink became a concoction made with sweet vermouth at the turn of the century. The 1950s saw less vermouth and in the 1970s it became a Vodka only drink as that spirit overtook gin in popularity. The new millennium saw the martini become a sugary neon colored cocktail served in a 'martini' glass.

Truth be told, there is no actual 'martini glass,' it is only the cocktail glass that became the glass of choice for the martini. 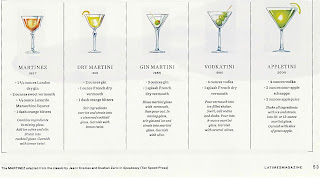 A true martini is made with gin, vermouth to taste and garnished with an olive. What was once The Kangaroo has become known as the vodka martini, but the purists know better - there is no such thing as a vodka martini. 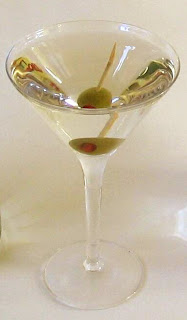