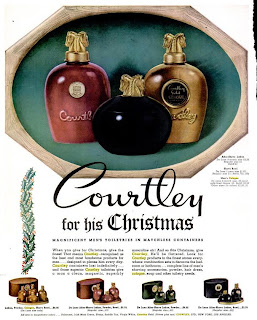 In the new Sinatra biography by James Kaplan, "Frank: The Voice" (post to follow), Kaplan makes repeated references to Courtley Cologne. The scent was worn by bandleader,  Tommy Dorsey and eventually by Sinatra, who wanted to emulate Dorsey. 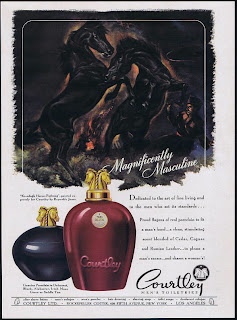 I'm not sure when the scent was discontinued, but it was introduced by Bill Nassaur in 1937, whose Courtley Ltd. also boasted shaving soaps, lotions, talcs and bubble baths.  All  Courtley products were packaged in handsome porcelain flagons and carried such masculine names as "Chukker" and "Steeplechase." The industry in the mid 1940s was a $50,000,000 a year industry and the competition included such brands as Seaforth, Sportsman and Yardley. 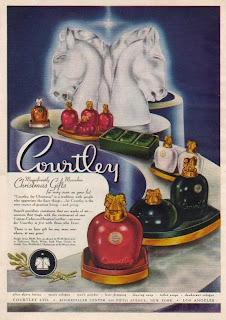 Courtley Cologne was a blend of Cedar, Cognac and Russian leather, and their logo was a three dimensional double horse head that served as the lid to the product. An ad copy, at the time, read, "Dedicated to the art of fine living and the men who set its standards..." 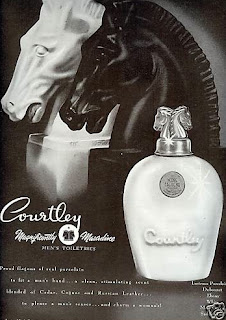 In 1946 Mr. Nassaur sold the business to William R. Warner & Co., Inc, a drug and cosmetic conglomerate for, what Time Magazine listed as, "several million." Warner & Co. went on to become Pfizer and the scent was retired to make way for other aphrodisiacs which come in far less impressive packaging.